After a long summer of working the fields, we decided that last week was a good time to relax, swim and sunbath at the sea – gremo na morje. Holidays at the sea is also a very popular activity for Slovenians, as well as Europeans from the surrounding countries. In Istria, the largest peninsula in the Adriatic Sea, are located many popular destinations to choose from, such as Portorož in Slovenia, Rovinj and Pula (and much more) in Croatia.

Croatia, our neighbour, is well-known for its beautiful beaches and I always wanted to witness it with my own eyes. We concluded to visit Rovinj, Croatia for this time – it has one of the best beaches in the region and it’s only 3 hours drive away.

As we got closer to the borders, we saw many currency exchange station, euro (€) to kuna (kn) – the conversion is approximately 1:7.

Croatia is in the European Union, but not in the Schengen Area.

I needed my passport (and permanent residency card) while my husband, his sister and her partner, who are all Slovenians, only needed their ID card. No visa needed in our case.

Always verify which requirements you need before traveling abroad, to avoid bad surprises!

The 1 hour drive to Rovinj from the Slovenian-Croatian borders was surprisingly smooth and fast. The highway was very fluid and without holes. There is a toll to use it, we got an ticket when we went on the highway and only paid when we exited it. It costed us 33 kn  to reach our destination.

Renting an Apartment with Airbnb.com

Basically, the whole area were we stayed were apartments and guesthouses for tourists. We found ours using the popular website Airbnb.com, which let you host and rent homey accommodations.

Enjoying and Exploring the Beaches

Kuvi Beach
The closest beach to our apartment was the Kuvi Beach, located at approximately 400 m away.  The beach was made of pebble and rocks, which can be a little sensitive for the sole). The water was cold at first, but when you gather enough courage and plunge yourself in, the feeling is just awesome. And the water taste very salty as well…

We walked a little bit further down and was able to find sand under the water. The water a decently clear and clean. We even rented a small paddle boat and ventured in the outer water. Very nice experience!

Mulini Beach
The most “deluxe beach” of the area is indeed the Mulini Beach. A nicely designed concrete beach with classy bar gives a feel of exclusivity. Another part of the beach is made of gravel and is very family friendly.

The water was clean and very clear. Tiny fishes can easily be seen, a perfect spot for snorkeling. There were jellyfishes in the water, we got scared at first, but then found out (not by touching) that they are totally inoffensive!

The promenade around the Mulini Beach is really nice for walking or cycling and it leads to the Marina and the town center.

Lone Bay Beach
Just across the Mulini Beach is the infamous Lone Bay Beach, one of the most frequented beaches of the area. The beach is mainly pebbles and rocks. The setting is nice with shadows of trees. It is also near the entrance of the Zlatni Rt Park.

Maybe we went on a bad day, but compared to the other beaches, there was some debris in the water – which can sometimes be bothersome.

Other beaches
Unfortunately, we didn’t have enough time to swim in all the other beaches of Rovinj, such as Amarin Beach, Polari Beach, Katarina Island Beach, St. Andrew Island Beach and so on.

Also known as the Golden Cape Park, the Zlatni Rt Park is the oldest protected site in the region of Istria. The park is also adjacent to the Škaraba Forest – an ideal and beautiful location for strolling and cycling by the sea and through forest paths.

We walked all the way from Lone Bay Beach to Kuvi Beach. On the way, we passed by Zlatni Rt Beach, Balsamake Beach and Škaraba Beach – a total of _km stroll

Visiting the Old Town of Rovinj

The old town of Rovinj was first built on an island, and it was later connected to the mainland in the 18th century. Its sight is simply charming and lovely. From afar, the St. Euphemia Church stands prominently in the middle.

The streets were cobbled and narrowed with adorable artisan shops. The town square is also small. Another interesting feature of the old town of Rovinj is the Balbi’s Arch on the Grisia street was built in 1678. 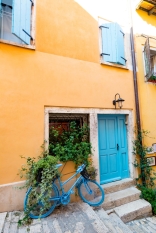 Walking up to the beautiful St. Euphemia Church was nice and easy. The sea view from around was awesome! A copper statue of St. Euphemia stands on top of the 60 m tall bell tower, beside being beautiful, also acts as a wind bane.

From the port of Rovinj, many ferries go to the surrounding islands (such as Katarina Island or St. Andrew Island) and others popular destinations as well (Pula, Trieste, Venice, Piran and much more).

Surprise on our last evening in Rovinj

For our last day in Rovinj, we’ve decided to eat in town. After walking around a little bit, we settled for Copacabana, a restaurant by the sea. I had a delicious fresh grilled fish dish with mussels, squid and crayfish paired with spinach potatoes. Yummm!

During our late meal, we were surprised by fireworks and a live concert by Severina, one of the most popular pop-folk singer in Croatia!

Last but not least, one of my most memorable surprise was to enjoy a very delicious, absolutely delectable and yummiest ice cream ever (lavender and melon flavor) and walking by the sea, on our way to the apartment.

My first little vacation at the sea was wonderful. I came back home tanned and relaxed 🙂 There are still a lot of beaches to visit in the region. Let’s see where will we go next time, because surely, we will go again! Visit my Gallery for more photos.